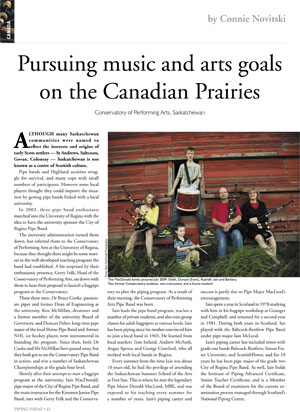 The CPA instructors are the most successful and experienced instructor team in Saskatchewan, and this shows in years of success working with bands and developing players. At the same time, all these people have continued to perform, compete, and develop skills and programs. At right is an article on the Conservatory Pipe Band that appeared in Piping Today, the magazine published by the National Piping Centre in Glasgow, Scotland. You can download/read the entire article here.

Band Director Iain MacDonald has been working with pipers and bands in Saskatchewan for over 30 years, and has also been a member of Scottish and Canadian grade 1 bands. Many of his pupils have gone on to be successful with top-level pipe bands. Iain also organizes the Sound Advice summer school in Regina, which has had a positive impact on so many players.

In 2007, Iain was profiled in Celtic Heritage Magazine. You can read that here. He holds the Graduate Certificate of the Institute of Piping [now The Scottish Qualifications Board], and also the Senior Teachers Certificate. Iain is an Examiner for the SQA piping exams, and also holds a B.A. and a B.Ed. from the University of Regina.

Iain runs a communications business and a bagpipe business, and teaches private and group lessons at the Conservatory.

In 2017, Iain was named to The Top 15 Living Canadian Pipers and Drummers by pipes|drums magazine.

Barbara MacDonald has been teaching beginner pipers at the Conservatory since 2003, and her ability to inspire and entertain children has been key to the band's success. Barbara is also the pipe sergeant of the City of Regina Pipe Band, where she plays a key role in the band's ongoing success. Barbara learned piping in Regina, and played in bands British Columbia and Saskatoon.

Outside band, Barbara is a Registered Nurse, has a Bachelor of Nursing (UBC) and has Master's Degree from Columbia University. She is co-owner of IDEA-diabetes an enterprise working to change the way people think about and manage their health.

Laura Schmeling learned drumming in a local youth pipe band, and has since gone on to play and teach in a number of bands. Laura was an instructor for the CPA program  a number of years ago, and now returns with her own children to play! Laura is a professional engineer in her non-band life.

Ruaridh MacDonald  Ruaridh started as a student in the CPA band, went on to play in the City of Regina Pipe Band, and eventually play several years with the top Scottish band Inveraray and District, with whom he has been a 2x European Champion and 2019 World Pipe Band Champion.

Other instructors include members of the City of Regina Pipe Band with many years experience playing and teaching, and we also use senior students to assist and guide their teaching to help bring along the next generation of instructors!